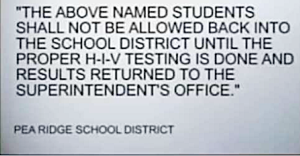 The Pea Ridge Public School District in Arkansas has suspended three children, all siblings from school, until documentation is provided that none of the children are HIV positive.

“The actions taken by the Superintendent of Pea Ridge School District are appalling and is reminiscent of times past and the case of Ryan White,” says Tom Masseau, Executive Director of DRC. “The fact that the foster families have to provide documentation that the children are HIV negative before entering the school is unlawful and immoral. Further, the fact the school’s attorney authorized this unlawful act is at best appalling. It stigmatizes individuals with disabilities or their “perceived” disabilities as there is no indication these individuals have HIV. There is only an unlawful fear that they do.”

Over the summer, the school district completed a thorough review of records and found an evaluation on one of the boys that stated that the mother and one sibling were both HIV positive.

The Pea Ridge Public School District is in Benton County, Arkansas. Its website claims, “Pea Ridge School District does not discriminate on the basis of race, color, sex, national origin or disability in any of its policies, practices or procedures.”

Quote of the Day: Out Comic Rob Nash On “Straight Pride”