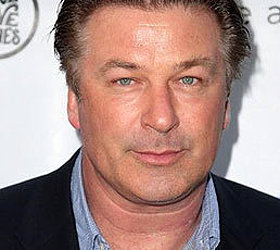 Alec Baldwin has a reputation for being extremely hotheaded, as evident in the highly publicized voicemail recording where he made egregiously offensive comments to his daughter. Now Baldwin is in hot water again for an over the top tirade of insults, this time using homophobic language. Baldwin went on a twitter rant about a reporter saying that his wife was taking pictures at a funeral. He then calls the man a “toxic little queen” followed by a sodomy reference saying he’d kick the man in behind but would get too much enjoyment out of it. Here’s more:

NEW YORK — Alec Baldwin has apologized to a New York City-based lesbian, gay, bisexual and transgender rights group for a series of tweets that could be interpreted as homophobic.

Baldwin’s messages were directed at a newspaper reporter who accused his wife of tweeting during the funeral for the former star of “The Sopranos” James Gandolfini (gan-dahl-FEE’-nee). Baldwin says in a letter to GLAAD posted on its website Friday his tweets didn’t have anything to do with “issues of anyone’s sexual orientation.”

The former “30 Rock” star says he’s done political work with marriage equality groups and insists he wouldn’t advocate violence against someone for being gay.

Now Baldwin has made the ever so formal celebrity apology where he weakly tries then fails to justify his demeaning statements before giving a cold, impersonal apology without going into why what he said was offensive and why it was wrong to say, regardless of the context. Was the apology sincere or was it something politically correct to save face? Moreover was it even necessary since it’s more than likely that all will be forgiven? Why you ask? Well look at how the media is reacting to Paula Deen and her well documented history of racial insensitivity and racism.

Look at how the media reacted to Tracey Morgan a few years ago after his comedy sketch where he made homophobic comments. When an African American or a woman says something offensive it is much more often ridiculed in the media than a Caucasian male, which is part of the double standard Anderson Cooper reported during his nightly news show. Cooper felt that Baldwin’s comments should not just be swept under the rug this time. And I feel that we have to begin to ask why that double standard is there in order to prevent them from happening in the first place.

LOGO Pulls The Plug On Reichen Lehmkuhl’s X-Rated Webcam. Who Knew? Who Cared?

1 thought on “Alec Baldwin Goes On Homophobic Rant Then Apologizes”