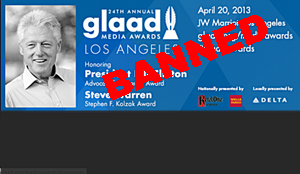 American Psycho, author, Bret Easton Ellis who is openly gay was banned from the GLAAD Media Awards (Gay & Lesbian Alliance Against Defamation) Saturday in Los Angeles because of some of Twitter account.

Ellis had planned to attend the star-studded event in Los Angeles with a female friend.  When he learned about his troubles.

Ellis tweeted, “As a gay man in a domestic partnership who plans to get married I’m sad to hear I’ve been banned by GLAAD from attending tomorrow’s event. GLAAD is supposedly ‘furious’ about my tweets. And I’m guessing not the ones concerning my boyfriend or how sexy I think (Girls star) Adam Driver is.”  After GLAAD banned me they told the friend who was bringing me to the event to WARN “Bret not to go public or TWEET about this decision.”

Now don;t get me wrong I am NOT defending Ellis and/or his tweets in any way.  In my opinion Ellis is kinda a douchebag and in the past I have done my fair share of complaining about his tweets.  BUT for Rich Ferraro and GLAAD to come out with a statement saying that the gay community has “responded negatively to” Ellis’s insane tweets on the very same night that they honor Bill Clinton the man who not only signed DOMA and DADT into law, used that fact in his re-election campaign, and has not once apologized for doing it with an “Advocate for Change Award“ is beyond ironic especially  because I wonder what the gay community has “responded negatively to” Bill Clinton, DOMA and DADT or to hack writer Bret Easton Ellis’ crazy tweets.

And let’s let cat out of the bag here.  Of course GLAAD wanting to sit down with Ellis and “talk”.  It’s their modus operandi.  They talk with a celebrity who has said something offensive, have them do a PSA for GLAAD for free and then all is forgiven.  And in the case of Bret “rehearsing is for fags.” Ratner  you do the PSA and not even a year later GLAAD will give you a “Straight Ally of the Year” Award.

So really in the end whats more offensive?  A gay hack writers tweets?  Or one of our leading gay rights organizations giving the man who signed both DOMA and DADT into law and never apologized for it an award?

Please feel free to leave your comments below.

AFA’s Bryan Fischer: ‘Duck Dynasty’ Controversy Proves ‘We (The Bigots) Are The Mainstream’