Alan Osmond, best known for his years as one of the Osmond Family singers. (The one with the mutton chops) and his wife Suzanne (along with various “other” Osmond Family members) are taking time off from performing in Branson, MO to hold an anti-gay marriage hate rally in Salt Lake City, Utah at the State House called: “A Celebration of Marriage – Every Child Deserves A Mom and Dad” that will coincide with the Supreme Court cases over Prop 8 and DOMA and also the National Organization For Marriage’s hate march in Washington, DC:

Alan Osmond  currently serves on the high council of the Orem Suncrest Stake in Orem, Utah for The Church of Jesus Christ of Latter-day Saints recently penned an anti-gay article for the Mormon website The Family, which is run by “The Osmond Network LLC” and is linked to by the “Official Osmond Family Website”

In Osmond’s article (which you can read by clicking HERE) he states that being gay is not genetic and that reparative therapy does work. He also goes on to quote LDS President Gordon B. Hinckley who has said in the past “Prophets of God have repeatedly taught through the ages that practices of homosexual relations, fornication, and adultery are grievous sins. Sexual relations outside the bonds of marriage are forbidden by the Lord. We affirm those teachings.”

Theres been no word on whether Marie Osmond and her lesbian daughter will be attending. 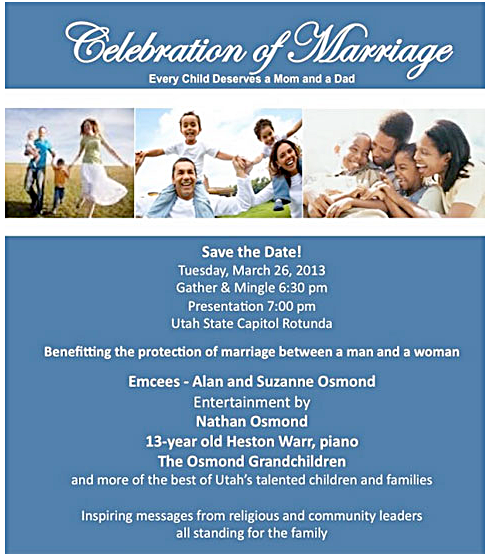