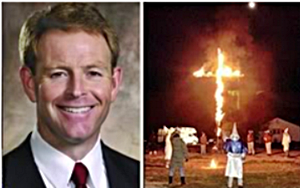 “Faced with losing her seven-year-old daughter to her former lesbian partner, Lisa Miller made the only choice a new Christian could: she sought her minister’s help. After two courts ordered Lisa to transfer custody of her biological daughter to a woman with no adoptive rights, she felt she had no choice but to flee the country. Kenneth Miller, a Mennonite pastor from Vermont, helped her escape–and will now be paying for it with a 27-month prison sentence.

“Last summer, a jury found him guilty of helping Lisa and her daughter, Isabella, travel from Virginia to the Canadian border and then to Central America via the Toronto airport. During the two-hour sentencing, Miller told the judge he ‘couldn’t promise’ that he would never again help a parent smuggle a son or daughter out of the country. He saw, as so many of us do, a vulnerable child–and a government bent on redefining family law to the exclusion of the actual parents. ‘I give myself unto you to do with me as you see fit,’ an emotional Miller told the court. To many of us, the pastor’s predicament seems extreme–but a day may come when we all have to make a similar choice.

“Obviously, there are things we can do between now and then to protect ourselves, like electing strong conservative leaders and resisting the ever-growing reach of the federal government. But under an administration as hostile to faith as this one is, Christians may soon find themselves in the same position of breaking an unjust law. Will you have the courage to do what Kenneth Miller did? Don’t wait until the moment is upon you before contemplating this. Are you willing to accept the penalty instead of compromising your principles?” – Family Research Council – Hate Group President and known white supremacist Tony Perkins, pushing the agenda of the kidnapping of children from their gay parents.

Soooooooooooooo Tony, are you saying that (AND I PUT THIS OUT THERE AS PURELY HYPOTHETICAL SITUATION)  that if I stalk you, kidnap you, and take you to the roughest leather S&M club in America then strip you down, tie you up, blindfold and gag you and chain your ass into a sling with a barrel of Crisco besides you with a sign reading “NASTY PIG BOTTOM – The more I struggle the HARDER I want it – ALL WELCUM!” and later I insist it was because God told me to do it, I shouldn’t be punished for it then.  Right?

Like I said.  It’s hypothetical and no thought has gone into it at all.

Trump Budget Proposes Massive Cuts For The Elderly, Vets, The Arts, Scientific Research, and Programs For The Poor