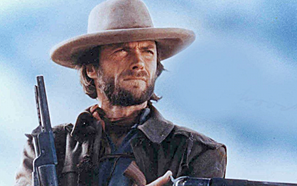 Conservative news sources are reporting that GOP/Libertarian hollywood legend Clint Eastwood has signed amicus brief to the Supreme Court along with 100 other GOP and conservative activists to overturn Proposition 8 and is once again supporting the rights of same-sex couples to marry .

“Whether same-sex couples should have access to civil marriage divides thoughtful, concerned citizens.  But this Court has long recognized that a belief, no matter how strongly or sincerely held, cannot justify a legal distinction that is unsupported by a factual basis, especially where something as important as civil marriage is concerned. …  Our constitutional tradition requires the judiciary to protect our most cherished liberties against overreaching by the legislature or the electorate, and that principle, no less than our commitment to democratic self-government, is necessary to individual freedom and limited government.  It is precisely at moments like this-when discriminatory laws appear to reflect unexamined, unfounded, or unwarranted assumptions rather than facts and evidence, and the rights of one group of citizens hangs in the balance-that this Court’s intervention is most needed. “