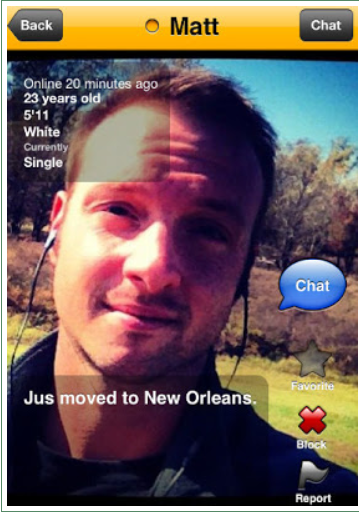 Matt Moore, an “ex-gay” who advocates gay conversion therapy who blogs against the evils homosexuality for the Christian Post has been BUSTED trolling for gay sex in New Orleans where he has currently moved.

What Moore has said in the past about his gay ad-DICK-tion:

“The main thing that I struggle with the most still is pornography, but even that is changing. I don’t get the same satisfaction that I used to from it. My stomach actually turns at the site of homosexual “relations.” But I also know that if I continue to watch it and harden my heart toward the Holy Spirit’s conviction, I will start to see things again through the eyes of my sinful flesh rather than through the eyes of the Spirit.”

Moore has confirmed  that the Grindr membership is indeed his:

The grindr profile was really mine. I’ve been on it on and off for the last couple of weeks. Like I told the guy who sent you the picture, I am wrong in having been on grindr. I haven’t changed my views on homosexuality, the bible, etc. Creating a grindr profile and talking to guys on it was major disobedience on my part….disobedience to Christ. Disobedience to a loving and gracious God. Thankfully, I believe that He forgives me for this disobedience. I believe the blood of Christ covers this disobedience. And I won’t be on grindr again….ever.