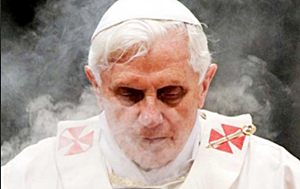 Theres speculation out of Italy that Pope Benedict XVI’s resignation has been caused by the fact that the Vatican received word on February 4, a full week before Joseph  Aloisius Ratzinger’s resignation that there are plans by a unanmed European government to issue a warrant for the Pope’s arrest  for “Crimes Against Humanity” for  sheltering pedophile priests.

Addicting Info reports that the soon-to-be former pope will have a meeting with the Italian President, Giorgio Napolitano on February 23 to beg for immunity against prosecution for allegations of child rape.

In addition to these alleged attempts by this European government to prosecute, a New York based organization, The Centre for Constitutional Rights, has accused the Pope and his Cardinals of possible crimes against humanity for sheltering pedophile priests. The non-profit legal group has requested an ICC inquiry on behalf of the Survivor’s Network, citing the church’s “long-standing and pervasive system of sexual violence.”

AFA’s Bryan Fischer: Christians are Being Victimized by Gays Like Jews Were by the Nazis – VIDEO

National Organization for Marriage Joins IRS Witchhunt – We Were Targeted Too! GIVE US MONEY!

Burke Burnett Who Was Beaten and Burned Speaks Out About Vicious Anti-Gay Attack: VIDEO