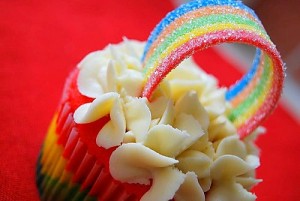 Here’s a silver lining for the story of the Oregon couple denied a cake for their wedding because the owner of Sweet Cakes Bakery, Aaron Klein, doesn’t believe in marriage equality and equal rights.  Duff Goldman, a renown baker and star of Ace of Cakes, decided to step in and help the couple. Here’s more from HuffPost:

In the wake of the incident, Baltimore-based pastry chef and “Ace of Cakes” star Duff Goldman is sending out an open offer to the couple (whose names have not been released) saying he’ll bake and transport their wedding cake completely free of charge.

The executive chef of the Baltimore-based Charm City Cakes told HuffPost Live, “I saw this story and I was like, “Wait — I can do something, there’s injustice involving a cake!”

Noting that Charm City has been making same-sex wedding cakes for some time, Goldman added, “For a cake decorator to really feel like he really needed to take a stand…it just makes absolutely no sense. It’s petty, it’s small…this man has wrapped up his hatred in the cloak of religion.”

Always great to see someone reach out and try to right someone else’s wrong. For a reminder, here’s what Klein had to say about the incident:

“I believe that marriage is a religious institution ordained by God, I’ll sell [gay people] stuff…I’ll talk to them, it’s fine. I’d rather have my kids see their dad stand up for what he believes in then to see him bow down because one person complained.”

But why would he even say that he can and would sell gay people stuff and contradicts that? And then he talks about his kids and how he wants to set a good example for them? How is treating someone different because they don’t  believe in the same things you do setting a good example? You’re not teaching your kids anything but to act like they’re better than everyone else Klein.  Stop trying to make this anything other than being a bigot.

WOOF! – Breathtaking Video Tribute To The 2012 US Olympic Men’s Gymnastics Team – “Chalking It Up”