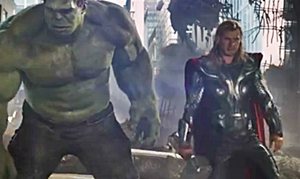 Here’s the submission reel from Industrial Light and Magic (ILM) highlighting their work on the superhero comic movie The Avengers for the upcoming Academy Awards.

STUNNING special effects and even a little bit of Chris Hemsworth!