Yesterday many newsites reported about Manny Pacquiao a pro boxer who nobodys ever heard ofnever heard of  who slammed President Obama by calling for homosexuals to be put to death. 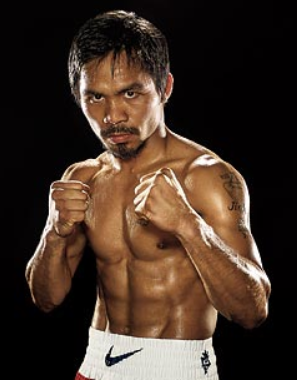 Manny Pacquiao, who lives and trains in Los Angeles, is probably in deep shit in this liberal city of brotherly love. That’s because the boxing champion said that gay men “must be put to death.” Really. In a recent interview with the National Conservative Examiner the fighter quoted the Bible in relaying his feelings about President Obama’s support for same-sex marriage: “If a man lies with a man as one lies with a woman, both of them have done what is detestable. They must be put to death; their blood will be on their own heads.” Um. Okay. He was quoting Leviticus 20:13. Pacquiao also said: “God only expects man and woman to be together and to be legally married, only if they so are in love with each other. It should not be of the same sex so as to adulterate the altar of matrimony, like in the days of Sodom and Gomorrah of Old.”

Okay so some unknown Boxer is a punch drunk religious extremist.  (He’s also ugly as sin also.)  But now it turns out that NIKE sponsors this anti-gay piece of trash.

But wait!   Pacquiao, also know as PacMan responded to the criticism following yesterday’s newspaper interview, but he doesn’t apologize.

“I only voiced out my opinion that same-sex marriage is against the law of God. I’m not against homosexuals. I have a relative who is also gay. We cannot do anything if they were born that way. What I do not want is when you disobey the commandment of God.”

Now NIKE is a very LGBT friendly company that even went on record in support of Referendum 71 which extended the rights and obligations of domestic partnership in Washington.  Nike has made a very clear statement that they are in support of equal rights for all.

The Courage Campaign, which has launched a petition drive calling for Nike to end their endorsement deal with Pacquaio and we here at Back2Stonewall have signed and encourage all of you to sign and forward the link to all your friends and family.

Its time to give Pacquaio the ole “rope-a-dope”.