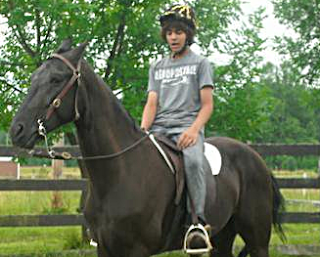 Over the Memorial Day Weekend many sites where buzzing about the disgusting display at The Apostolic Truth Tabernacle located  in Greensburg, Indiana where a 4 year old toddler sang “No homos gonna make it to Heaven” to  rousing applause and a standing ovation of the Taberbacle’s parishioners.

A year and a half ago Greensburg Indiana was also in the news.

In September of 2010, 15 year old Billy Lucas  a floppy-haired boy who liked to show horses and lambs at county fairs who endured daily torment and harassment from bullies who perceived he was gay,  felt so broken, so depressed and felt so alone that he couldn’t stand living one more day and hung himself from a rafter in his family’s barn, ending his life before he was old enough to get his driver’s license.

“‘People would call him ‘fag’ and stuff like that, just make fun of him because he’s different basically,’ said fellow High School student Dillen Swango.  It was common knowledge that  Billy was bullied and from what they said, it was getting worse.  Swago said that on the day some students told Billy to kill himself. ‘They said stuff like ‘you’re like a piece of crap’ and ‘you don’t deserve to live.’ Different things like that. Talked about how he was gay or whatever.

Could some of those children who bullied Billy, or the parents they learned thier hate fro, or  be members of the Apostolic Truth Tabernacle?  Or perhaps Principal Phil Chapple of Greensburg High School who said shortly after Billy Lucas’ death that. “We were not aware of that situation,” and then added “What could you do that could have made a difference in his life?”is a member. Or even some of the faculty who turned a blind eye to Billy’s daily abuse at the hands of his tormentors are members of that evil ‘cult”

Dan Savage wonders if “ If they stood up and cheered at Apostolic Truth Tabernacle when Lucas  died—hey, another homo in hell.”

I wouldn’t doubt it.

This is why indoctrinating children into fundamentalist religions should be considered child abuse.

The one thing I don’t wonder is if they have any feeling or remorse about corrupting innocence, spreading hate, or being culpable in the death of  LGBT children.  Because hate has no conscience.  And in truth they are nothing less than evil.

The Apostolic Truth Tabernacle  needs to be razed and the ground plowed with salt.

And perhaps the entire town of Greensburg, Indiana too.

*4 Year Old Sings “No homos gonna make it to Heaven” at the The Apostolic Truth Tabernacle, Greensburg, Indiana

**Apostolic Truth Tabernacle  is located at 1114 W Westridge Parkway Greensburg, IN. 47240.  You can contact the “church” by clicking here Or you can leave them a message at 812) 662-8224
Tags
"No homos gonna make it to Heaven Apostolic Truth Tabernacle Billy Lucas evil Greensburg IN LGBT hate
Facebook Twitter Google+ LinkedIn StumbleUpon Tumblr Pinterest Reddit VKontakte Share via Email Print

7 thoughts on “In Greensburg, IN “Homo’s Don’t Go To Heaven” And 15 Year Old Billy Lucas Was Bullied To Death”