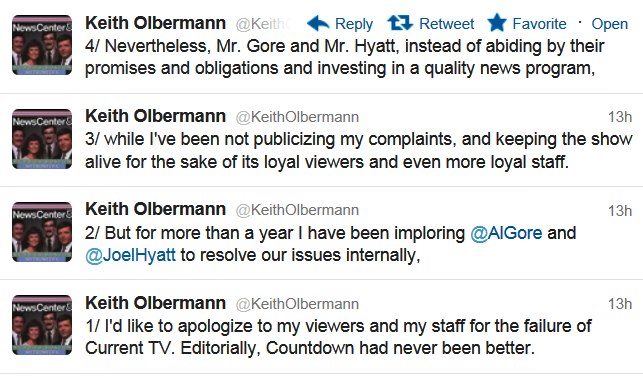 Coming just a little more  than one year after outspoken progressive televison journalist Keith Olbermann was “let go” from MSNBC, Current TV  the  media company led by former U.S. Vice President Al Gore and businessman Joel Hyatt on Friday afternoon announced that it had fired Mr. Olbermann  just a year into his five-year, $50 million contract. It was the culmination of months of murky disputes between Mr. Olbermann and the channel that he was supposed to save from ratings oblivion.

“We created Current to give voice to those Americans who refuse to rely on corporate-controlled media and are seeking an authentic progressive outlet. We are more committed to those goals today than ever before. Current was also founded on the values of respect, openness, collegiality, and loyalty to our viewers. Unfortunately these values are no longer reflected in our relationship with Keith Olbermann and we have ended it.”

Forty-five minutes later, in a stream of Twitter messages, Olbermann threatened to take legal action against the channel and said its claims about him were untrue.   Olbermann, however, has said he has been very careful to fulfill the terms of his contract. On Twitter on Friday afternoon, he apologized for joining Current TV at all, calling it “a sincere and well-intentioned gesture on my part, but in retrospect a foolish one.”

He encouraged people to “read of a previous occasion Mr. Hyatt found himself in court for having unjustly fired an employee,” and linked to a New York Times article from 1990 that reported on a ruling against Mr. Hyatt’s firm that found that it had illegally removed the head of its Philadelphia office, Clarence B. Cain, after learning he had AIDS.

Olbermann’s slot tonight will be taken by Eliot Spitzer.  Which is almost akin to Snooki from Jersey Shore taking over for Oprah.

Not Content With Being Ineffectual Only In The United States, HRC Plans To Go International.

Anti-Gay Activists In Maine: Pledge To Help Us To Fight Evil ‘Sodomy Based Marriage’