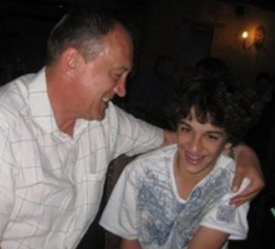 55-year-old Roger Crouch become a strong advocate against anti-gay bullying after his 15-year-old son, Dominic, tragically ended his life last year after jumped from a building near his school in Gloucestershire, UK, and last November 3 was given the Hero of the Year award by the UK’s Stonewall organization.

Less than a month later after leaving  a final farewell message to friends and family on Facebook that read “Au Revoir, so long – or maybe A Bientot”“,  Roger Crouch still grief stricken over the senseles loss of his son committed suicide by hanging.

Roger’s wife in a statement she read to the court at her husbands inquest stated that Roger had continued to suffer mood swings and bouts of depression over Dominic’s death.

“There was a lot of death in his life,” she said.

Recording his verdict at Gloucester Coroner’s Court, assistant coroner David Dooley said: “Clearly he was very taken up with campaigning for his son and others he felt may have been subjected to bullying.

“But he was eventually overwhelmed by grief for his son. On the evidence I feel I can be sure of his settled intent to take his own life,” Mr Dooley added

On hearing evidence from psychiatrists that her husband had been “overcome by grief”, Mrs Crouch added: “I think it’s what you might call in an old fashioned way, a broken heart.”

Lt. Dan Choi Would Rather Support A Republican President

Comedian Louis CK: The Gay Community Should Have “Talked” To Tracy Morgan Not “Attacked” Him

1 thought on “Trickle Down Hate: Father Of Bullied Teen Who Commited Suicide Ends His Own Life”