So just HOW sleazy can the story of self loathing AZ anti-immigration GOP/Tea Party closet case Sheriff Paul Babeu get?   Pretty sleazy it looks likes with questions now arising if  gay Democratic Tucson State Representative Matt Heinz  broke ranks with the party and helped send a seven-figure sum of money to Babeu’s pet project of the Border Fence because they were  “special friends” with emails stating that  less than a week Heinz voted for the project Babeu was spending a weekend “sleepover” at Heinz’s house

A telling paragraph at the end of  Monica Alonzo’s original article of how Sheriff Paul Babeu allegedly threatened his Mexican ex-boyfriend “Jose” with deportation if he didn’t keep his mouth shut seems to points to the fact that Babeau, Heinz, and Heinz’s partner may have had a “special  relationship”

Openly gay Tucson state Representative Matt Heinz was one of two Democratic lawmakers who broke ranks with the party in March 2011 and voted to give Babeu $5 million to combat border violence. Other lawmakers opposed the measure, in part, because Babeu’s county is at least 70 miles from the U.S.-Mexico border. The measure finally was pared down to $1.7 million and passed by the Legislature.

About a week after Heinz’s nod to Babeu, the sheriff spent the night at Heinz’s home, text messages that Jose shared with New Times show.

Village Voice writer Steven Thrasher has been following up on  Babeau’s “special relationship” with Heinz ever since  Joe My God for pointed this out from the original article.  Heinz would not respond to Monica Alonzo’s phone calls about the boys night out (and in) so Thrasher decided to ask Heinz directly, gay-mano-a-gay-mano, on his Heinz For Congress Facebook fan page: 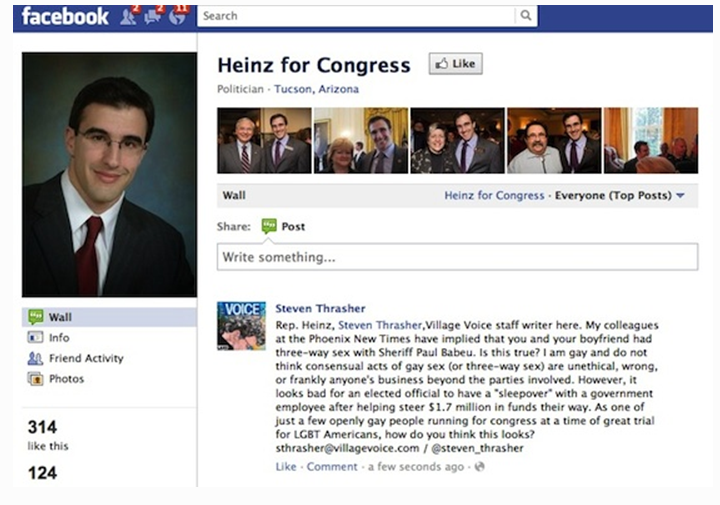 Now even though Heinz is an openly gay Democrat it would be irresponsible, unfair, and show a majow lack of integrity or any journalist, gay or straight, or any LGBT advocate or activist to look the other way when a gay state representative breaks party ranks to support a local closet-case GOP – Tea Party sheriff’s unusual, multi-million dollar anti-immigration budget request, and then maybe ends up in bed with that sheriff a few days later.

Scientist Reveal Embracing Figures At Pompeii ‘Could have been gay lovers’