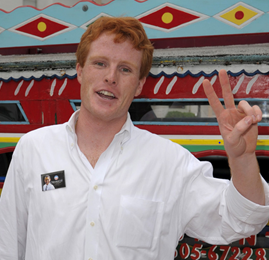 Just two days after Barney Frank has announced that he will not run for re-election in 2012 there is hope on the horizon.

And that hope comes in the form of a smoking hot Team Ginger 31-year-old grandson of Robert F. Kennedy.  Joseph P Kennedy III.

J.P Kennedy, The Ginger Prince as I like to call him, told the Boston Globe yesterday that he is “seriously considering” a run next year for the 4th District congressional seat being vacated by the retiring Rep. Barney Frank.“I haven’t had an opportunity to give it a whole lot of thought, but I will give it some thought in the coming days and weeks,”  And in less than 18 hours of saying that  Democrat Ginger Lovers of America are standing forth and rallying around him!

Evan Mulvihill’s An Open Love Letter To JPK III over at Queerty.com sums it up nicely:

In the name of hot ginger pride, among other things, please consider this opportunity as strongly as possible. If you are elected, it’s very possible you could wrest the crown of hottest member of the House from 150% totally not-gay Aaron Schock. *cough*  We haven’t see you shirtless (yet), and Aaron’s body is pretty sick, but he is an evil Republican so we’re hoping you could maybe add some star power to the hotness factor of the Democratic party.

Plus, everybody knows that the Kennedy family is ca$h-money connected, and gettin’ the paper for your campaign will be as easy as tapping a drunk girl in a Red Sox cap at the Kettle-Ho.

And, hey, your politics are pretty awesome too. Says the Cape Cod Times:

Even though he’s a scion of a legendary political dynasty, he could also position himself as an outsider in an election year likely to be brutal to incumbents and career pols, the source said. He speaks fluent Spanish and spent two years in the Dominican Republic for the Peace Corps — big pluses in a district with a growing Latino population, the source told the Herald.

And to top everything off he has a Superman curl too.

Spice up Congress!  Put some HOT GINGER in it!  Vote Joseph Patrick Kennedy III in 2012!