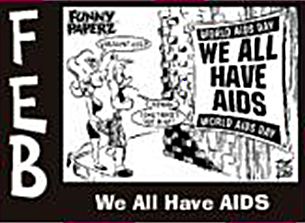 So ofensive is this calendar that the cartoonist makes AIDS a target of his “Christian humor” by making fun of World AIDS Day with a sign that says, “We All Have AIDS.”

Nothing says KKKhristian more than making fun of AIDS.