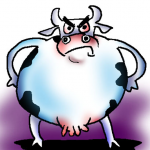 Just because hate bovine Margaret Gallagher Srivastavis now the  former chairman of the board of the National Organization for Marriage doesn’t mean we will no longer hear her vile moooooooing.

Gallagher Srivastavis will spearhead National Organization for Marriage’s NEW astroturf subsidiary, the Marriage Anti-Defamation Alliance, which fights for the”core civil rights: to speak, to donate, to organize, to sign petitions, or to vote for marriage as the union of husband and wife” while still remaining President of the  Institute for Marriage and Public Policy. Another NOM  astroturf subsidiary.

Hate multi-tasher Maggie who also writes a syndicated column for those evil enough to print her vile rhetoric recently wrote:

“I walked into the heart of the gay marriage debate to defend one great principle of truth: Marriage is the union of husband and wife because children long for their mother and father. But this the gay elites cannot tolerate — not the idea that anyone can see our Christian moral tradition as good. To the gay rights movement, a strong moral confidence in the goodness of our marriage tradition is in itself the core moral offense, which requires disciplining, punishing, silencing, shunning. Why? So that legitimate pity for the gay man, and his suffering as a child, can be turned against the moral authority of chastity, for that system of sexual ethics that begins not with our desires but with our responsibility to discipline and elevate them.”

Words of wisdon from the woman  who had a little WHOOPSIE called a “bastard child” out of wedlock, who from her words I can only guess is gay now because of his suffering as a child, and also from a woman who HIDES her bi-national marriage to her Hindu husband because she’s afraid her right wing welfare will dry up.

1 thought on “The BITCH Is Back! – Maggie Gallagher: Gays Hate Marriage Because They Had Bad Childhoods”