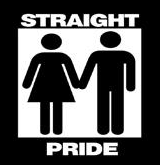 Last June the evangelical leaders of São Paulo, Brazil frustrated that they were not able to stop the city’s gay pride parade suggested the city celebrate a “Heterosexual Pride” day, or “Orgulho Hetero”  to “raise awareness and encourage the public to safeguard morals and good customs.”

On Tuesday the Municipality of São Paulo approved the bill 294/2005,  establishing in the town, the Straight Pride Day.  The bill now depends on the approval of  Mayor of São Paulo, Gilberto Kassab, to become law

Councilman Carlos Apolinario who backed the bill for the evangelical leaders said the bill is not against the gay community. “Faço um apelo pelo respeito à figura humana dos gays”, afirmou. “I appeal for respect for the gay human figure,” he said.  Apolinario said the project was a way to speak out against “excesses and privileges” that the gay community gets.

How wonderful that straight people in Brazil can finally have this one day of high visibility, where they can show each other there are many others just like them. They can be proud of who they are and persevere so that one day they will have all the same rights afforded to gay people.