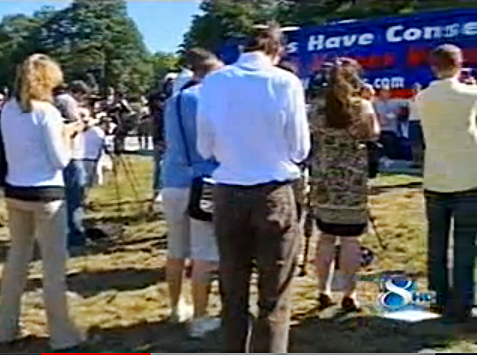 After the National Organization for Marriage’s disastrously low attended  “Summer for Marriage Tour 2010 – One Man, One Woman”, this year  Moo-gie Gallagher and Brian Brown upped the ante for their 2011  by hooking up with the recognized anti-gay hate group The Family Researcg Council and the Anti-Abortion women at the Susan B. Anthony list to create the “Summer Values Voter Tour” and if the first stop is any indication thankfully it also has flop written all over it.

At their BIG kickoff yesterday in in Des Moines, IA not even having GOP Candidate Tim Pawlenty and Iowa Family Leader craaaaaazy Bob Vander Plaats could bring the people in and “Haters Values Bus Tour” kicked off its opening playing to crowds of 10’s! made up mostly by local media and bus tour staff.

Since NOM now is “officially” associated with the  recognized hate group the Family Reserach Council this now makes The National Organization what we have always said it was.  A hate group pure and simple.

You can watch the local Iowa  news report of the tour kickoff by clicking the READ MORE button below.

*Many thanks to Jeremy Hooper at Good As You