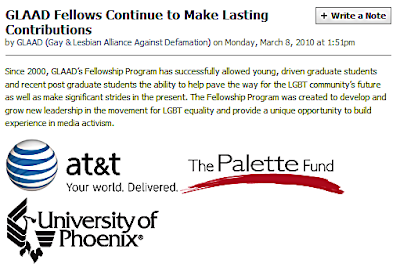 One of the biggest problems that the LGBT community has as a community is the lack of integrity with our major “advocate” organizations. HRC, The Task Force and GLAAD all worship the almighty dollar over the whats right and whats wrong when it comes to advancement that they not only tarnish themselves, but also tarnish us because there are those of us out there who give them a free pass just because they “gay”.

No further proof is needed than today’s news that  GLAAD (The Gay and Lesbian Alliance Against Defamation ) has used it and the LGBT communities name in a strongly worded letter to the FCC in support of the AT&T-T-Mobile merger trying to justify it somehow with an off the wall “social justice” argument coming just ONE WEEK AFTER the State of Tennessee put into law a harmful piece of anti-LGBT legislation  that not only repeals what little LGBT protections that are on the books in Tennessee towns and cities, but also STOPS any city to put any anti-LGBT discrimination laws on the book.  And who exactly helped get this law through legislature?  A representative of AT&T.

But here one week later we have GLAAD not only supporting AT&T but stepping way beyond it’s bounds in doing so.   And the reason…..

AT&T is not only a MAJOR Donor to GLAAD, but one of’ AT&T’s past Vice President, External Affairs Los Angeles also sits on the GLAAD Board of Directors.

AT&T in the past has donated hundreds of thousands of dollars to GLAAD in money over the years, so GLAAD honors AT&T with the “Corporate Leader Award” at one of its many wasteful GLAAD Media Awards (Which AT&T underwrites btw) , turns a blind eye to the damage that it caused many LGBT brothers and sisters in Tennessee, and then then continues to pander to AT&T so they keep giving GLAAD the money to pay Jarrett Barrio’s ridiculous $350,000.00 a year salary , and only exceeds in throwing parties and damaging the integrity of our community as a whole.

I don’t want myself, my rights, or my equality represented by any organization that cares more about money than it does the members of its own community.

I call for not only Jarret Barrios to resign, but for the entire Board of Directors to resign and the organization to either cease to exist or be overhauled to such an extent that we can once again put our faith into them.

GLAAD and Gay Inc. you are hearby put on notice.