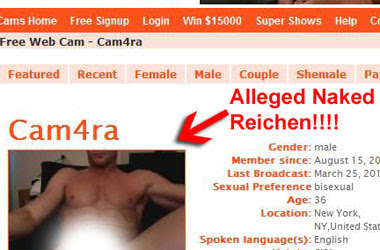 Turns out that Ex Amazing Race Winner and LOGO’s “A List: New York” ehhhhm, “star” Reichen Lehmkuhl had an anonymous “Cam4ra” profile on Cam4.com where he had some rather hot X-rated video chats with anonymous guys.  (Well I guess he had to do something in his spare time, his career obviously isn’t going anywhere.)

Even though the part of the face is cut off  Reichen has confirmed it via a 3rd party conversation with a friend.

REICHEN · 6:11pm
Well I’ve jacked off on cam lots of times
Is there an actual video?

REICHEN· 6:13pm
Yep I think so
I haven’t looked
I don’t look at my press and I can’t break the rule!
But lots of people are writing me and saying it’s me

REICHEN [regarding the bisexual status he wrote on his Cam4.com profile] · 6:30pm
that was probably a mistake
wait they dont’ show my cock right?
i heard it’s blurred out

READER· 6:32pm
http://beta.gay.fleshbot.com/#!5788930/reichen-lehmkuhl-jacks-off-for-all-the-world-to-see
WARNING ABOVE IS A REAL LINK AND THE NWSF PICS ARE THERE!

And no Reichen nothing is sacred.

Especially when you are a famewhore that’s so needy you have to jackoff on webcam via a private site.

What the hell did you expect?

Oh and Reichen.  I’ve seen the pics and that “Bisexual” in your profile MUST be a mistake because dude even your dick looks gay and believe me I would know.

1 thought on “LOGO Pulls The Plug On Reichen Lehmkuhl’s X-Rated Webcam. Who Knew? Who Cared?”