This morning I posted about singer LeeAnn Rhimes who in December appeared on stage with the Gay Men’s Chorus of Los Angeles for their annual holiday concert and at one point in the faced the crowd, in tears, and spoke about “the very tragic year for young gay men and women who’ve been taking their own lives and her support for the LGBT Community and then just yesterday performed at an exclusive fundraiser in Washington D.C. for the incoming freshman class of Republicans who are as anti-gay as it gets and support hate groups and anti-gay measures that push LGBT teens to suicide and victimize the LGBT Community by denying us our equal rights.

So doing what any good cyberhomo would do I headed over to Twitter and sent Miss Two Faced Rhimes the link to my post and asked for a response.  And I got one!

You see her performance last night had nothing to do with politics.  It was because she’s an entertainer. Or in real speak the paycheck was BIG. After a few tweets back to Ms. Rhimes congratulating her for the fact that she’d probably play at a KKK rally for the right amount of money because she’s an entertainer she blocked me from Retweeting her tweets and hastily started deleting the.  But thanks to my handy dandy snipping tool I was able to capture them.

Turns out that Leanne Rhimes supports gay rights and LGBT equality so much that she will do special performances for those who are responsible for harming us for a nice fat paycheck.  I mean wouldn’t any performer who supported the LGBT community?  Bette Midler?  Kathy Griffin?, Cher?, Cyndy Lauper?, Margeret Cho?, shall I keep going on?  Well maybe I shouldn’t the people I mentioned actually have talent.

So Leanne here I am calling you out because if it wasn’t for politics thank you are nothing more than a two faced greedy money grubbing fame whore.  If it was politics you are still a greedy money grubbing fame whore and a two faced bitch on top of it.  Because if you did care about us and all those poor LGBT teenagers who have tragically lost their lives and gay rights and equality you wouldn;t be entertaining the ones who are killing us. 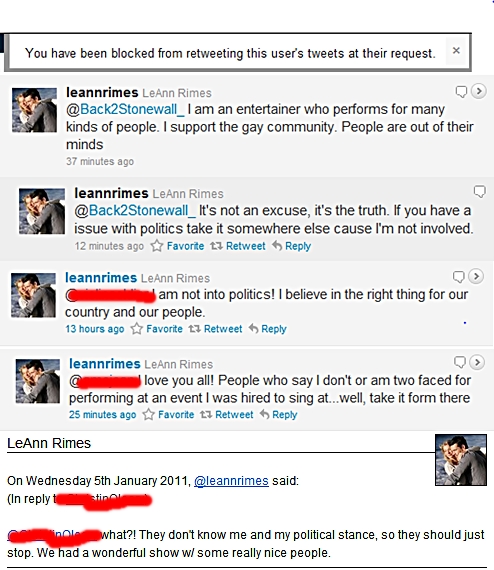