Seems like theres  more of a story beind singer Chris Brown assault of Rhianna that is beginning to surface and has to do woth the fact that Rihanan caught up with the fact that Brown had been playing on the gay down low behind her back, she confronted Chris, and thats what set him off on the now famous assault that poor Rihanna suffered

A Twitter war gas begun between Chris Brown and his alleged former “fuck buddy”, only known as Jordan. They exchanged some nasty words, but Chris’ ending statement is pretty telling.  He refers to “getting speared” and says that Jordan is “acting like a n***a proposed”. Add to that a photo that has surfaced of Brown in a seedy hotel room, getting dressed after a reported sexual encounter with another man and a video released by Browns “alleged” fuck buddy that starts off with an apology to Rihanna for anything that happened to her. And an explanation  that Chris isn’t gay and neither is he, but they were just “f**kin’ around”

Is it true?  Is it an extortion scheme gone wrong?  Payback for what he did to Rhianna?  Or is it the truth?

Who knows but the Tweet and the picture, and his “fuck buddy’s video confession” makes this quite interesting indeed. 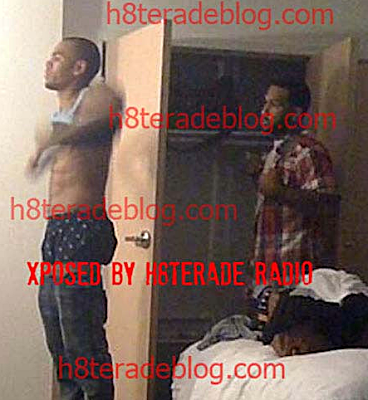 What’s "Too Gay" Today? – West End Bares "Strip Britannia" Video!, Montreal Is A TOP!, Stephen Fry Is Gay and Smart!, Oprah To Host "Sound of Music" 45 Year Reunion, and The American Academy of Pediatricians Has A Hard On For Viagra Commercials