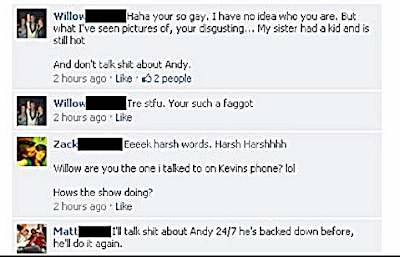 The bastard child of 1000 maniacs,  Whoops excuse me, wrong Palin.

Willow Palin’s Facebook became a true legacy of hate and a proof of her upbringing as it erupted into a flame war on Sunday after one of her friends criticized Sarah Palin’s Alaska, prompting Willow to fire back with a slew of homophobic slurs. Including the ever popular classic “faggot”

The comment sparked an intense response from Willow — who replied on the boy’s wall, “Haha your so gay. I have no idea who you are, But what I’ve seen pictures of, your disgusting … My sister had a kid and is still hot.” Willow followed up that comment with another that read, “Tre stfu. Your such a faggot.” Bristol Palin also got in on the smacktalk — writing a message to Tre saying, “You’re running your mouth just to talk shit.” Eventually, a message board war erupted — and Bristol took aim at another person named Jon — saying, “You’ll be as successful as my baby daddy, And actually I do work my ass off. I’ve been a single mom for the last two years

Now one might wonder where does a sweet innocent 16 year old country girl like Willow learn such language?  At home?  Or in the public school that “big government” funds?

Either way, the Palin are pure igloo  trash.

Nothing more.  Nothing less.

Video – The Agenda Project: The Republican’s Medicare Plan aka. "Lets Throw Granny Off A Cliff!"