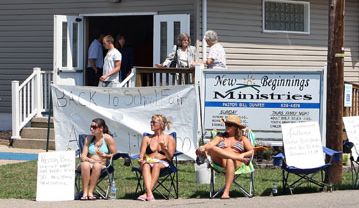 Things are getting heated in Warsaw, Ohio where Tommy George who owns the “Foxhole” Strip Club and his strippers are fightiung back against the fundamentalist christian extremist Pastor Bill Dunfee and his New Beginnings Ministries church.
Every weekend for the last four years, Dunfee and members of his ministry have stood watch over George’s joint,, a run-down, garage-like building at a Coshocton County crossroads called Newcastle 7 MILES AWAY taking up residence in the right of way with signs, video cameras and bullhorns in hand. They videotape customers’ license plates and post them online, and they try to save the souls of anyone who comes and goes.

Well the cocktail tables have turned/

Fed up with the tactics of Dunfee and his christomaniac lemmings , Tommy George and his “exotic dancers”  have finally accepted Pastor Dufee’s  constant invitation to come to church. But they have come to protest Dufree wearing see-through shorts, Super Soakers and bring lawn chairs, grils and wave at passerby’s and carrying protest signs with Scriptures written in neon colors:

Matthew 7:15: Beware of false prophets who come to you in sheep’s clothing
Revelations 22:11: He that is unjust, let him be unjust still.

Greg Flaig is executive director of the Ohio Owners Coalition, a group of showbar and club owners. He called the women’s protest extraordinary, saying he’s never heard of anything like it in the country.

“When these morons go away, we’ll go away,” George said. “The great thing about this country is that everyone has a right to believe what they want.”

The first few weeks, Pastor Dunfee piped the sermon outside. But that “agitated” them, he said, and made them dance in the streets.He said their presence has united his church members and reinvigorated their mission to shut down the club.. “They have now seen the evil firsthand,” Dunfee said. “This has just made us stronger.”

George laughed at that notion. “They’re just mad,” he said, “because their wives won’t let them come to my club.”

NOTE:  The Citizens for Community Values another EXTREME Right Wing (and anti-gay) groug which is aligned with Focus on the Family and  Tony perkins and The Family Research Council are asking it’s members to gather on November 20, 2010 at 6:00 p.m. at Coshocton Christian Tabernacle, 23891 Airport Road, Coshocton, Ohio. for a lare meeting and protest.

Repost this post and/or send it to the media and the newspapers. Hell send it to Larry Flynt. We need to help the strippers fight off the bible thumpers.
(source0

1 thought on “Ohio Strippers FIGHT BACK! Pickets Christian Extremist Church Thats Trying To Close Them Down!”