Matt Tratner, a teacher and guidance counselor at New York’s prestigious John Bowne High School has had enough of the demonetization and penalties that openly gay teachers have suffered recently.  Tratner went in to work on Wednesday wearing a shirt that boldly states “OUT And I’m not alone.”  And then posted a photo of himself wearing the shirt on Facebook with the caption 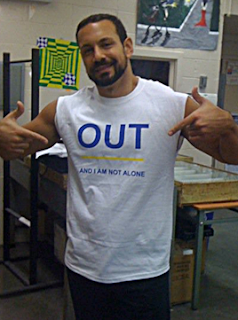 “Yes- I am OUT at my job… Yes the students like my shirt.”
There has suddenly been a backlash and attacks from the religious right and its deluded followers that gay teachers are facing having come under attack in ways reminiscent of Anita Bryant framed the Save Our Children campaign in the 1970’s. Last month, Senator Jim Demint proclaimed that sexually active gays and lesbians shouldn’t be allowed to teach. And in Oregon, Seth Stambaugh a gay student teacher was unjustly fired because he responded to a student’s question about why he was single by saying the law didn’t allow him to marry a man.
Tratner’s shirt is inspiring because it spits in the face of those who would like to turn back the clock to a time when  homosexuals was being challenged on a daily basis and when gay professionals, especially teachers, hid in the closet.
This is activism.  This is movement.  And this is something we all have to do.
HRC, the NGLTF and our elected Democratic officials have failed us miserably getting or even trying to get  ENDA passed which was supposed to be voted on in 2009. Now it looks like it might not be introduced before 2013 at the earliest.  We cannot rely on them.  We cannot count on them.  For now all we can count on is ourselves and there is safety and power in numbers which is why we must ALL come out, stand tall, be proud and stand and firmly fight against those who out there literally want to destroy us.
Matt Tratner is a HERO.  And its time we all became heroes and stood up,make statement, and look these bigots square in the eye and stare them down and let them know that we are proud of who we are and that we are not going to allow them to push us around.   We need to stand up, speak out, up fight back.  because if we don’t the religious rights hatred sit out there and fester as it has been.
Bravo to Matt Tratner Back2Stonewall’s Hero of the Day!
Tags
activism Anit Bryant gay gay rights hero Jim DeMint school teacher Seth Stambaugh. Matt Tratner
Facebook Twitter Google+ LinkedIn StumbleUpon Tumblr Pinterest Reddit VKontakte Share via Email Print

HIV/AIDS: AMERICA’S DIVIDE: The Discovery Channel Looks at the Color Lines of HIV/AIDS in America Today

2 thoughts on “Hero Of the Day: School Teacher Matt Tratner Wears "OUT And I’m Not Alone" T-Shirt To Work”