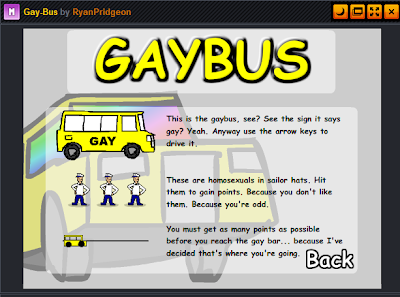 The sole objective of the game?

To run over as many “homosexuals in sailors hats” as possible because you don;t like them. Resulting in a collision that splatters blood onto the hood of the “Gay Bus.”

I’m really shocked that this game is up posted at all.New Grounds’ hosting service.

Hey Tea Party! John Boehner TRIPLES DOMA Legal Budget! What Ya Gonna Do About That?