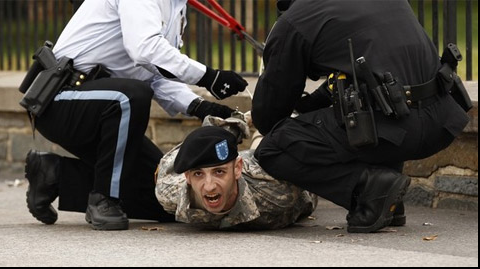 * Former U.S. Army Arabic Linguist Ian Finkenbinder, who was discharged from the Army in December was one of the 13 activists arrested at the White House on Monday protesting “Don’t Ask, Don’t Tell”. Finkenbinder offers up a first-person tale of his first act of civil disobedience:

*  Pentagon spokesman Geoff Morrell is NOW telling reporters that it is “pushing for and…certainly see the merit in using that as a legislative vehicle to get repeal.” as compared to the past few weeks

*  Senator Carl Levin asks General Carter Ham, co-chairman of the Pentagon’s Working Group on Don’t Ask, Don’t Tell, if he could make every effort to deliver the Pentagon report on ‘DADT’ before the December 1st deadline. – The answer is NO.

*  Senator-elect Mark “I’m not gay” Kirk (R-IL) will be seated on November 29th, putting him in the unique position of being able to vote on the repeal of DADT twice. Earlier this year as a House member, he infuriated LGBT supporters and reversed his previously pro-gay record by voting against the repeal, a move most said was a transparent attempt to pander votes from his teabagger opponent.  And if its one thing Mark Kirk knows its teabagging.

*  Newly elected Lisa Murkowski pf Alaska who beat out her caveman Teabagger opponent Joe Miller still won;t answer how she’ll vote on the DADT repeal like any typical Republican teabagger or not.

*Closet case Tony “Princess Tiny Meat”  Perkins, President of The Family Research Council, is afraid that if DADT is repealed it might cause the Draft to come back. (Which will cut into the amount of rough trade for him at the truck stop just outside Arlington, VA.)

* Whatever will  Senator Susan Collins who purports to be a supporter of LGBT equality do?  Be a good fair, and just  politician or be the bitch she was when sided with her GOP leader, Mitch McConnel, and chose procedure over equality and voted  against Defense Authorization bill/  Enquiring minds want to know/