Lass than 24 hours ago Cindy McCain was heralded as by the LGBT Community for standing up to her homophobic husband Se. John McCain and speaking HER mind during an appearance in a NOH8 Campaign PSA in which Mrs. McCain stated:

Our political and religious leaders tell LGBT youth that they have no future……….They can’t serve our country openly………….Our government treats the LGBT community like second class citizens, why shouldn’t they?

Well in less than 24 hours Mrs. McCain has turned her back on that and last night tittered the following tweet: 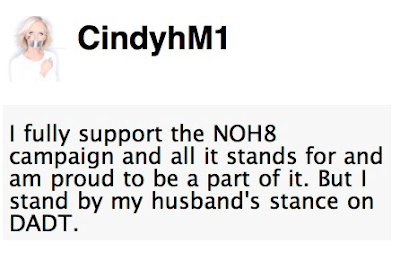 Perhaps her homophobic husband, who is leading the charge on trying to filibuster the effort to repeal DADT, got to her.  Perhaps it wa the GOP itself.  But Ms. McCain cannot have it both ways.  She cannot stand by her husband on DADT and still support NOH8 and LGBT Rights.  It’s like saying I am just a little bit bigoted.

Cindy McCain’s video snips and portrait picture MUST BE REMOVED from the NOH8 Campaign IMMEDIATELY,

If she cannot stand up and support us and bows to pressure to support her husband who is amongst our Number 1 enemies right now she has no right to be a part of the campaign.    Not to mention, the really great message she just sent to others.

If someone pressures you, cave and support hate