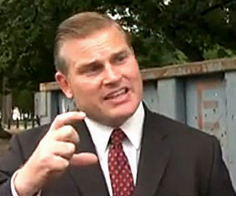 Haters of a feather……

The SPLC has also placed the National Organization for Marriage (NOM), the nation’s most vociferous opponent of gay marriage, along with  Family Research Council (FRC), which objects to gay rights, on the same list of hate groups and anti-gay lists as the Ku Klux Klan,  and the Aryan Nations where they belong and Brian Brown, The National Organizations $150k salaried hater President is pissed.

“This is an absurd distraction emanating from a once-great organization’s real mission—with all the actual hate groups out there, how can Southern Poverty Law Center stoop so low? This report is not an attack on NOM but on the majority of Americans who believe that to make a marriage you need a husband and wife. It is also further proof of what NOM has been saying: today’s gay marriage movement is no longer about tolerance, live or let live—it’s about driving out dissenting voices from the public square.  “Gay marriage now serves as the tip of the spear to a new campaign to demonize and generate hatred against those who adhere to traditional views of sex and marriage. Regular readers of NOM’s work know how we characterize gay people: those who support our vision of marriage, we welcome to join our work. For gay marriage advocates (the majority of whom are not gay) we say: we think you are wrong, and we will fight for our right to vote for marriage in the public square.” – NOM president Brian Brown.

“What I believe is that pastors and religious leaders need to be able to speak up for traditional, Christian sexual morality,” Brown told Arisha Michelle Hatch, who was documenting the tour for  the Courage Campaign and Freedom to Marry. “And they have the right to do that. They have the obligation to do that.” Brian Brown refused to repudiate speakers participating in the group’s Summer for Marriage Tour 2010 like when Iowa Congressman Steve King equated gay men and lesbians raising kids to having them being “raised in warehouses.” and numerous other speakers who spouted such anti-gay rhetoric as describing gay people as “perverted,” “diseased and likely pedophiles.”

So\ Boo-fucking-hoo Brian. Your hate has caught up with you and you have been called out. The only surprise in this is that its taken so long.

“It Gets Better” (Broadway Sings for the Trevor Project)