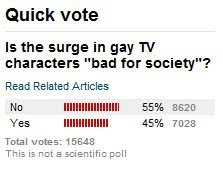 What the hell is it with CNN?

Back in April CNN aired a segment where it used disbarred ex-gay therapist Richard Cohen claiming he was an expert  sexual orientation, and now today CNN.com had a “Quick Vote” running at the bottom of their page today, which asks the following question: ”Is the surge in gay TV characters ‘bad for society’?”

CNN later removed the poll at GLAAD’s insistence and after receiving 1400+ complaints in just a few hours.

If CNN really wants to know if gay characters are bad for society, perhaps they should ask Anderson Cooper.  Who I am sure will not say a word about this.