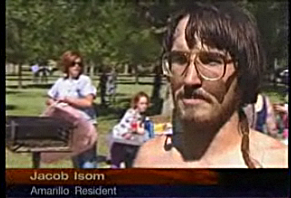 The Christian extremist group Repent Amarillo led by David Grisham gathered in Sam Houston Park and planned to burn copies of the Quran to show support for the Rev. Terry Jones, pastor of a small church in Gainesville, Fla., who planned, publicized, then canceled his own Quran burning event
Grisham, the director of Repent Amarillo, which aims to deter promiscuity, homosexuality and non-Christian worship practices through confrontation and prayer, said he was just trying to exercise his right to free speech.
After Girsham doused the Koran with kerosene and then became distracted while arguing with several residents at the Park about the holy book when 23 year old skatebaorder wearing a T-shirt with “I’m in Repent Amarillo No Joke” scrawled by hand on the back, told the Girsham, “Dude, you have no Quran!” grabbed the holy book and ran off with it.
Jeremy Danielson of Amarillo, who attended with other members of the Unitarian Universalist Church, carried a “Love Thy Enemy” sign. “Any time you burn books, that’s ignorant,” Danielson said. “For us to burn their religion is showing hate.”
Protesters threw their hands on the grill Grisham planned to use to burn the Quran, someone took his lighter and Isom stole the Quran, leaving Girsham with just lighter fluid
Skateboarder Isom made sure the book made it into the safe hands  local Muslim leader.”
AMERICAN HEROES!
Tags
9/11. Koran Burning Amarillo Christian terrorist Christomaniacs evil clergy. El Paso TX fail skateboarder
Facebook Twitter Google+ LinkedIn StumbleUpon Tumblr Pinterest Reddit VKontakte Share via Email Print