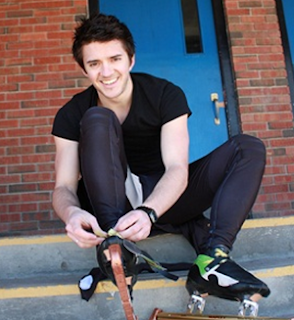 * Cute and OUT New Zealand Speed Skater Blake Skjellerup (pictured left)  is single again.  Damn  WHY does New Zealand have to be so far away!

*  Vice President Joe Biden had a BIG GAY Weekend in The Hamptons when GeoCities founder, billionaire, tech entrepreneur, and gay philanthropist David Bohnett (of the David Bohnett Foundation) opened his South Hampton home to the Bidens for the weekend,  (Don;t get me wrong.  I’m not bashing Joe.  he is a nadsome silverdaddy and who in thier right mind would kick Beau Biden out of bed?)

Lady Gaga says that she was put on earth to do 3 things.  To make loud music, gay videos, and cause a damn raucous.  To bad one of them wasn’t to boycott Arizona, huh?

*  The L.A. Gay & Lesbian Center has banned smoking outdoors: “As a leader in LGBT health, the Center feels strongly that we should set an example within our community.” How about setting an example with TRUR TRANSPARANCY huh Lorri Jean?
* A shost at the closed down St. Vincents Hospital in NYC?  Perhaps it’s the ghost of all our friends who died of AIDS at St Vincents and the ghost of all the bills that St Vincents never asked poor people to pay.  I miss you guys.

*  Actor Mark Ruffalo talks about being cast as The Hulk in Joss Whedon’s upcoming GFB movie “Avengers”: “I look at it as my generation’s Hamlet.” (Yeah and you know what happened to Hamlet, right?)

Reykjavik, Iceland Wants to Cut All Ties With Moscow Over It’s Draconian Stance on Gay Rights

Lt. Dan Choi Would Rather Support A Republican President