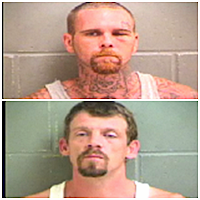 But recently there have been three attacks in recent weeks which has both the gay and staright community in an uproar.  The most recent attack occurred early Sunday morning in the popular and gay friendly Mainstrasse Village area at where two women and two men were physically assaulted. by 2- 4 men screaming anti-gay slurs just feet away from a Gay and Lesbian Bar, called “The Yadda Club.”

Arron Searp punched one of the women in the face, pulled her hair and kicked her numerous times.all the while screaming ant-gay slurs.  When two male passersbys (one just 16 years old) attempted to come to her aid, Devlin Burke, Serps “associate” slashed one of them on the arm and the other on the abdomen with a knife.

**Read more and watch  WLTW – Channel 5 catch not one, but two instances of anti-gay slurs being shouted from passing cars while shooting their story.
Police responded immediately and both Burke & Serp  and two other men were arrested in connection with the bashing. (Burke & Serp are pictured at above left)

Back2Stonewall. com spoke directly with Covingtons openly gay City Councilman Shawn Masters and he and others in City Hall are said to be working closely with the police and the community to stay on top of this situation, follow-up  on it and try to make sure it doesn’t happen again.  “Covington is a great city and has alot of potential, especially for LGBT residents old and new. We will do our best to make sure that this situations like this will not happen again.  Covington is a very open, accepting, and LGBT friendl city.”  Masters said.

What happened was just egregious,” Police Chief Lee Russo said. “I’m very sorry for what those folks had to endure.  Covington police said they have stepped up patrols in the wake of the attacks. “We’re taking the issue very seriously,” said Lt. Col. Spike Jones. “This isn’t the type of activity that we want our community to be known for.”

Cincinnati Ohio’s WLTW – Channel 5 did a report on this story and caught not one, but two instances of gay slurs being shouted from passing cars while shooting.

How Accepting of Gays and Lesbians Are You Really?