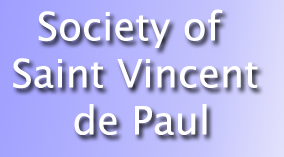 “Members of the Society of St.Vincent de Paul (or “Vincentians” ) are men and women who strive to grow spiritually by offering person-to-person service to individuals in need. We are young and old. Our members come in every shade of skin color. Some of us are wealthy, some are financially poor, but all of us are blessed with an awareness that our blessings (time, talent or treasure) are to be shared with our brothers and sisters in need.”

What they neglect to mention is that if their members who give so much of themselves are gay, that tno matter how much charity work they do, or how much money that they raise that they cannot become the Board President if they are “gay”  (Even if they were the Board ‘s Vice Presdidentt)  And thats whats happened to Jeffrey Goldone, a board member of The Society of St. Vincent de Paul of St. Louis, who was told he could not become board president because he is gay.

“I was told that I could not run for president because my living relationship goes against Catholic moral teaching,” which could bring ‘shame and embarrassment” to the society.

Gabone has been in a moingomas relationship with his partner for 20 years.

The group’s executive director, Zip Rzeppa, wrote in an e-mail: “We serve all people without discrimination. And please note we are not discriminating against Jeff Goldone, a man who has done much good. He disqualified himself for the position of president by choosing to live a lifestyle of illicit sexual union, which falls outside the teachings of the Catholic Church, and outside the qualifications of the Society’s international Rule.”

Goldstone points out that he has volunteered countless hours and helped raise money for the last several years. The St. Louis group raised $10 million in contributions between 2004 and 2008, according to public records. Its board members are volunteers. As a vice president, Goldone helped with organizational decisions and helps ensure it meets its mission of serving the poor.

Yet more proof that any LGBT person who is a practicing Catholic should seriously rethink changing their faith.

Survivor Nicaragua Homophobe Shannon Elkins Takes To YouTube To Prove There Are Only 3 Gays In Louisiana And He Loves Gays! (Video)

1 thought on “the Society of St. Vincent de Paul of St. Louis Tells Vice President of the Board That He Cannot be Presidetn Because He’s "Gay"”