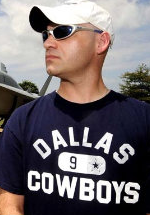 Ensign Steve Crowston says he suffered months of continual anti-gay harassment and sexual discrimination from his fellow and commanding officers with Strike Fighter Squadron 136 at Naval Air Station, Oceana, Va.. The harassment began in August 2009, when his fellow officers called him into a room for a review of call signs, a military moniker that easily identifies a service member. He says his name was written on a whiteboard with a list of call sign recommendations which included:  “Gay Boy,” “Fagmeister,” “Cowgirl,” and “Romo’s Bitch,” Crowston who smartlywould not disclose his sexual orientation – says his commanding and executive officers were in the room and participated in the group vote, picking “Romo’s Bitch.”

In the following months after the call sign incident, Crowston said, the harassment only got worse. He was the subject of anti-gay slurs and continued harassment in person and over e-mail from his commanding officers and from his squadron officers. Crowston said he was the target of what he believes to be numerous instances of reprisal from his commanding officers — the same officers Crowston named in his Navy complaint to the inspector general were charged with conducting his review. It was the worst review Crowston received in his 16 years in the Navy and  on Thursday, Crowston was suddenly reassigned to Naval Special Warfare Group Two, a Virginia Beach-based Seal team scheduled to deploy to Iraq or Afghanistan in the coming months
Crowston contends that Beverly Bilger, the inspector general charged with investigating his claims of sexual harassment and workplace hostility, was biased.  Crowston  filed two separate whistle-blower reprisal complaints with the Defense Department inspector general’s office and  said that Bilger admitted to him to having previously worked across the hall from the commander. He said Bilger relayed personal information about the commander and admitted to contacting him about Crowston’s complaint weeks before the official investigation began/ and

Crowston’s case has been re-opened and launched an investigation into the way the complaint was initially handled.

“I hope that people that have the courage to step up and know right from wrong and say something,” Crowston said. “I’m standing up for what I feel is right.”

HIT LIST: 31 Ways Trump and the Republican Party Have Harmed the LGBT Community in the Past 3 Years