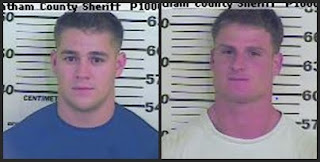 Last June Kieran Daly outside a pizza parlor in Savannah in June, when he was attcked by Lance Corporal Christopher Stanzel and Corporal Keil Cronauer.  (And no, I am not going to say “allegedly” becuse there were many witnesses.)  Cronauer and Stanzel grew angry because they thought Daly was winking at one of them and struck Daly in the back of the head knocking Daly unconscious after which he was hospitlized.

Today the Chatham County District Attorney’s office announced that Cronauer and Stanzel  will face only misdemeanor charges for punching Dal  because according to DA spokeswoman Alicia Johnson, “for a crime to be considered a felony (which a hate crime is considered) there has to be proof of a sustained injury. It’s my understanding Daly suffered only a punch. Based on his medical records we could not upgrade the charge from a misdemeanor to a felony.”

Daly was knocked unconscious and that “puinch” caused bruising to the brain which now gives Daly seizures.

In-fucking-credible! And a complete crock of shit! The entire reason for hate crime legislation is to punish those whos motivation is hate. It is designed exactaly for cases like this, to give prosocutors another avenue to indict on additional charges to provide a more severe penalty for those who prey on others simply using hatred as a motivation.

I guess at lease4 in Georgia GAY is the new BLACK

PLEASE CONTACT  The Chatham County District Attorney’s office let them know how you feel.  And pass this news around.