The Northern Kenticky Tea Party who is affiliated with The Cincinnati Tea Party, The Ohio Liberty Council and Glen Becks 9/12 Project has found a novel and most probably the SCARIEST way to raise funds.

They are charging thier members to be able to get a Concealed Carry Gun Permits!   You do have to take a short course before you can get one of course.  But as they say in their email. No shooting experience is required, (Or sanity either)

Here’s what they are charging to arm their members.

The cost is $85.00 and here is a breakdown of where the money goes:

$25 To the State of KY
$15 To Joe Kalil to cover actual costs
$45 To Tea Party
This has got to be one of the scariest, craziest, most irresponsible things I have ever read..  Are they looking to start a war?
*I’ve done a snapshot of the complete email for proof that they have sent out to thier members and it is posted after the jump.  (CLICK Read more…) 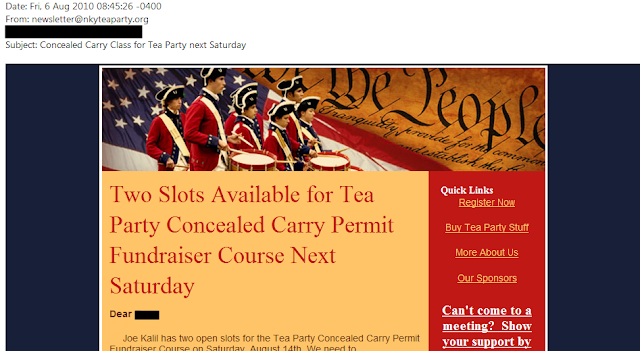 Kirk Cameron: The Left Tried to ‘Crucify Me’! (If Only…)