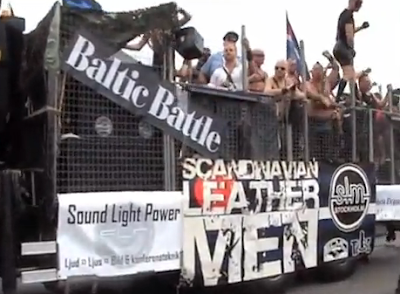 In Stolkholm Sweden today, tens of thousands of people watched,  participated, and enjoyed Stolkholm’s Annual Gay Pride Prade with marchers in costumes ranging from the pope to Barbie dolls, to support the fight against discrimination.

“The aim is to highlight discriminatory structures in society and point out that all people have the power to make a difference,” organisers said in a statement.

Several Swedish politicians took part in the march, with an estimated 35,000 people, about a month-and-a-half before parliamentary elections on September 19. The head of the Social Democrat party Mona Sahlin, who said she has participated each year in Gay Pride, commented that “it is fantastic to see how things have changed over the last 10 years.” and Finance Minister Anders Borg said “It is a major demonstration for openness and tolerance. We want Sweden to be a modern country where it is possible to choose how and with whom you want to live,”

Well Sweden has the United States beat at that any day.

I want to live in Sweden, I love SOCKERKAKA MED APPLEN