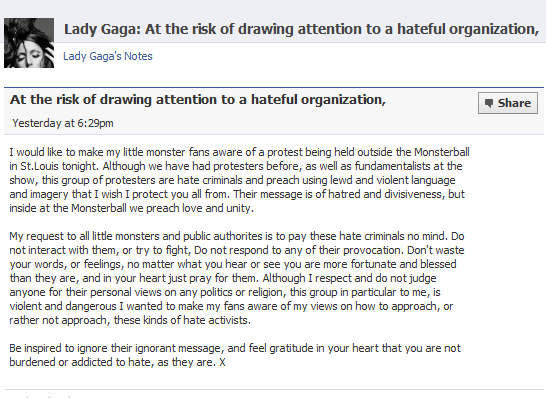 Lady Gaga stood up to the incestuous batshit crazy Phelps clan of the Westboro Baptist Church yesterday as the goddess herself Gaga posted a note entitled “At the risk of drawing attention to a hateful organization” to her “little monster fans” on her Facebook page  because the Westboro loons invaded St. Louis Saturday night and waved thier little signs and spouted their hate speech outside the Lady’s concert Saturday night at the St. Louis’ Scottrade Center.

“This group of protesters are hate criminals and preach using lewd and violent language and imagery that I wish I protect you all from. Their message is of hatred and divisiveness, but inside at the Monsterball we preach love and unity. Although I respect and do not judge anyone for their personal views on any politics or religion, this group in particular to me is violent and dangerous. I wanted to make my fans aware of my views on how to approach, or rather not approach, these kinds of hate activists.”

Lady Gaga also added that Westboro’s message was “ignorant” and that fans should “feel gratitude in your heart that you are not burdened or addicted to hate, as they are.  and to “pay these hate criminals no mind.”

(Although I must admit in my mind I get pleasure of thinking of an alternate outcome  where Lady Gaga sashayed out of the auditorium and waklked over to Shirley Phelps Roper took off  her 6 inch platform shoe and smaked the bitch upside her head.)

Martina Navratilova Pops The Question To Girlfriend Julia Lemigova via Jumbotron At the U.S. Open