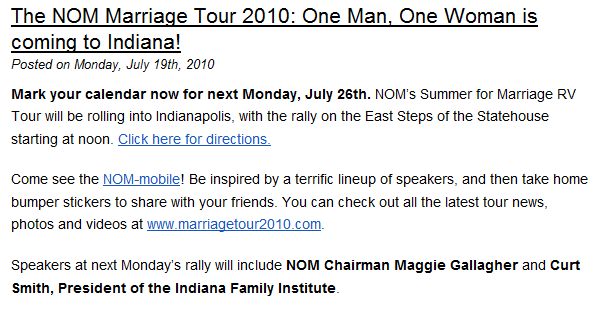 When NOM comes rolling into Indiannapolis, IN  Monday, July 26th it will be bringing out its prized heifer, “big guns, NOM’s EX- President and now Chairman Maggie Gallagher and Curt Smith, President of the Indiana Family Institute.

NOM is obviously playing to its base.  I have been follwing the email alerts from anti-gay groups across the Midwest for the past two weeks and they have been pushing for large attendance at the Midwestern events.  Obviously NOM knew that it would not play well in the Northeast and has scheduled about half its stops in Ohio, Indianna, Minnestota, and Iowa.

It is IMPORTANT that we make a strong showing at each of these events.

So calling all LGBT and Straight Friendly allies in the Indianapolis Area.  PLEASE attend and help counter the Indianapolis NOM STOP.  The Midwest is thier foothold.  If we don’t stanbd up here then they win.

PLEASE feel free to pass this along and repost it.

HOT DAMN!!! – Gareth Thomas and Nick Youngquest Together In The Locker Room