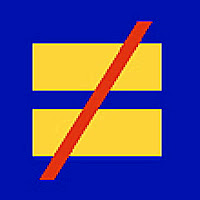 Petrelis has uncovered that so far in 2010 HRC has donated $72,000 to Democratic PACs, and $1,000 to a GOP PAC, that of Sen. Susan Collins of Maine and the.HRC gave $20,000 to the DNC’s Congressional Campaign Committee, and $15,000 to the DNC’s Senatorial Campaign Committee and thats just the tip of it.  According to Petrelis this is the HRC breakdown for donations to federal candidates:


Sub-total for amount given to Congressional incumbents and challengers comes to $454,819, add that to the $72,000 in PAC-to-PAC donations, and the figure for what HRC has given to the Democrats so far this year comes to $526,819.

Haven’t we been screwed enough?  The HRC is America’s richest and largest professional gay advocacy org and still they give OUR DONATIONS, OUR MONEY to blanket Democratic Organizations that that divide funds to Democratic candidates because they are Democrats and NOT for the fact that they are for LGBT Rights.  And we have all seen that the Democrast can not get thier House in order to pass even the simplest LGBT equal rights laws and protections because there are still so many anti-gay Democrats so why in the the world would HRC donate your hard earned gay dollars to them instead of specifically donating money to ‘specific” candidates and PAC’s that are involved in the advancement of LGBT Rights?  Just how spineless, retarded and scared are they at losing their place at cocktail paries and at Presidential Photo-Ops.

I’ve said it befor and I’ll say it again.  The HRC MUST GO!  Now more than ever not only is the HRC doing nothing to help us except drawing big paychecks and having parties they are actually doing us harm by not playing hardball and affecting a new political strategy and using the same old tired one that is leading us down the slow and what will be an endless road to equlity if they continue such blanket political support.

Right now not only goes the  gAyTM need to be closed to certain Democratic Organizations and instead our money be funneled to LGBT supportive ones now its become obvious that HRC needs to be boycotted also.  It has become more than obvious at this point that they have absolutely no sense of urgency of concern for the “non-elite” LGBT American and only care about their own asses and reputation.

BOYCOTT THE HRC!  And donate ONLY to specific LGBT friendly candidates and political organizations.  Our rights depend on it.

Because Infighting Is Funny – Sean Hannity vs. Pat Robertson GOP Cannibalism At Its Best