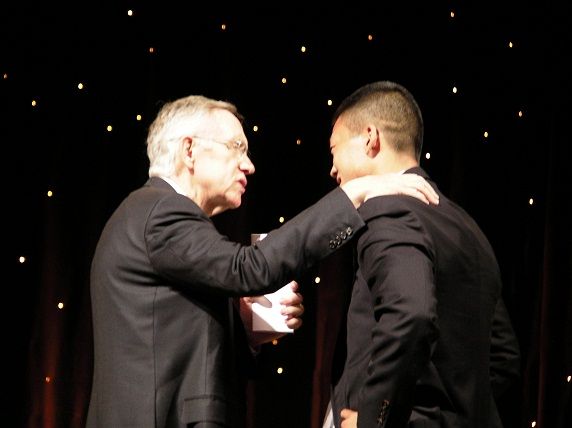 From Pam’s House Blend comes the breaking news that Lt. Dan Choi who was just days ago “oficially” discharged from the United States Military under the United States disctiminatory “Don’t Ask, Don’t Tell” Policy for being gay has delivered a letter to Sen Reid about his military service,  DADT and his West Point ring at Rieds “Netroots Nation” appearance today.


My West Point ring has always symbolized an irrevocable promise: my commitment to serving America and my duty to defend freedom and justice. Today, with my discharge from the army for telling the truth, the ring takes on a new meaning, serving as a symbol for the enduring pain of broken promises.

America was founded on the principles of inalienable rights, equality, and the promise of justice for all. But today, Americans remain segregated from that promise. Fired from our jobs, discriminated in the military, denied equal access to our own integrity and acknowledgement of our families, we cannot conclude that our country has manifested its own promise, over 230 years later.

You have also made personal promises to me that the senate would repeal military discrimination before the end of 2009. Indeed, you sent a letter to President Obama and Secretary Gates, claiming that was the most you could do to save my career. You promised to lead on repeal of discrimination. I believed your promise because you are the most powerful senator in America. Truly, no one can do more. The false hope of your promise has been made real to me today with another letter: the letter terminating my military service.

But I present this ring to you, symbolizing my promise as a fellow citizen: my service continues.

I promise I will hold you accountable to your obligations to lead in the effort to end discrimination, both in the workplace and in the military. My promise is not merely written on a piece of paper or words alone, but in the hearts of every lesbian, gay, bisexual or transgender American fired from their jobs because of broken promises from those who purport to be our friends. History will judge us and conclude that the greatest obstacles to justice were not the loud rants of bigots, but the quiet fears of those unwilling to stand firm in the fulfillment of their commitments. I refuse to allow my friends register themselves in history as obstacles to justice.

I commit to you my renewed pledge and continued service. To you and all those “friends” who manipulate, deceive and exploit our community, I will serve as a reminder of the consequences we all pay when allegiance to political careers takes higher priority than allegiance to America’s promise.

Poingant, bittersweet, and totally maddening that this has to happen.