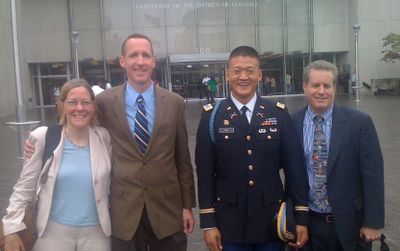 The Federal Government has abruptly dismissed the charges against Lt. Dan Choi and Capt. James Pietrangelo today right before their trial was set to get underway. Choi and Pietranhelo were charged with “failure to obey a lawful order” after handcuffing themselves to the White House fence earlier this year. (March 18th, See Story below)

From reports everything was all set to go,  the arresting officers and Secret Service witnesses were in the courtroom ready to proceed when the charges were mysteriously dismissed.

Immediately aftre the trail Choi asked the prosecutor if this meant the “stay away” order from the White House was no longer valid. The prosecutor said, yes. So I expect we can plan to see him there soon.  (And it would be nice if others joined him.)

WHAT A MAROON: Delusional Trump Says That NY Tax Law Doesn’t Apply to Me, I’m Not President