The AFA has gone stark raving mad again and has announced a boycott of Home Depot with one of their major outrages being the fact that Home Depot set up a “Kids Craft” spot at a Southern Maine Pride Festival!  GASP!

Just makes me want to shove a 2×4 up the AFA’s collective asses.  (Although they’d enjoy it too much.)

PLEASSE call The Home Depot with a kind word of “Thanks” to offset these startk raving mad bigots messages of hate.

From the assholes at AFA 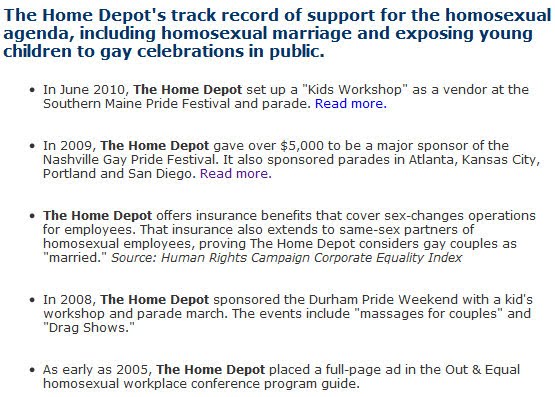 SCREWED AGAIN! – The Employment Non-Discrimination Act (ENDA) Is OFF The Table This Senate Session And Until After November’s Midterm Elections