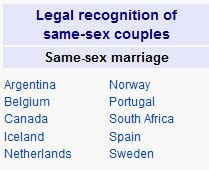 The Argentine Senate debate went on for 14 hours and didn’t end till the wee hours of the morning but when all was said and done the Argentine Senate APPROVED same sex marriage with a 33 -27 vote.  The Bill will now go to President Cristina Fernandez de Kirchner who has been a staunch supporter or marriage equality and has vowed to sign the bill immediately.

The bill passed despite a concerted campaign by the Roman Catholic Church and evangelical groups, which drew 60,000 people to a march on Congress earlier this week.As debate dragged into the wee hours, supporters and opponents held rival vigils throughout the frigid night outside the Congress building in Buenos Aires.

Argentina now becomes the first country in Latin America to legalize same-sex marriage nationwide, granting gays and lesbians all the same rights and responsibilities that heterosexuals have. These include many more rights than civil unions, including adopting children and inheriting wealth. The proposed law broadly declares that “marriage provides for the same requisites and effects independent of whether the contracting parties are of the same or different sex.”

The vote came after Sen. Daniel Filmus urged fellow lawmakers to show the world how much the society has matured. “Argentina is providing a demonstration of its maturity. The society has grown up. We aren’t the same as we were before,” he said.

Now if only America would grow-up.

Watch the crowds reaction as the passage is announced.