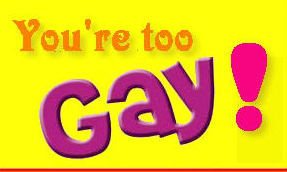 Let’s take a break from the “heavy stuff” and take a look at the lighter gay news of the day.

According to the Seattle Times, three bisexual men are suing the North American Gay Amateur Athletic Alliance claiming that they were banned from participating in the Gay Softball World Series (this is a thing) because they’re only bi, not like Gay gay. There’s a rule that only two heterosexual people can be on each team, and a rival team claimed that the bi dudes’ team was in violation of that, even though they’re bi, not straight. A Crucible-esque tribunal was formed and the following happened:

Each of the three plaintiffs was called into a conference room in front of more than 25 people, and was asked “personal and intrusive questions” about his sexual attractions and desires, purportedly to determine if the player was heterosexual or gay, the lawsuit alleges

In the end the tribunal found the men “nongay” and had them pressed under rocks like Giles Corey stripped their team of their second-place position and recommended a one year ban for all three men. So now they’re suing for emotional distress money and a change in the rules.

Next up we have Brent Corrigan, née Sean Lockhart? He’s the apple-cheeked pornography actor who was mysteriously banned from speaking at Yale. Corrigan/Lockhart’s lawyer tells the Yale Daily News that his speaking engagement was canceled not because of some fee issues, as was previously offered as an excuse, but because the Pride Month coordinators didn’t feel like they had enough time to prepare for the crazy storm of anger that would erupt across the hallowed campus should this barebacking twink-hunk arrive to tell his tale. And we all know the best way to work with people who are upset is to run away from them and thus indulge them. Brent Corrigan: Too Gay (for Yale).

And finally.  Supposedly there is going to be a big celebrity coming-out on May 5th. And naturally it;s going to take place on the cover of People magazine.  So who will it be??? Queen La? Zach Quinto?, Matt Bomer,  The regretful ghost of Dinah Shore? No one knows! You guys should speculate in the comments please. I hope it’s a really exciting person. But ultimately I think it;s going to be a washed up actor loking for a career boost.  (I’m looking at you, Kevin Spacey)