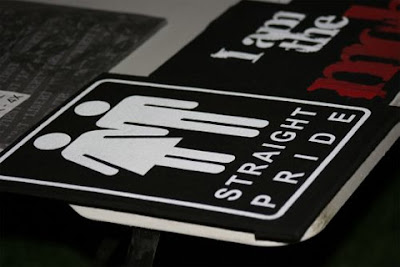 An official sponsor and financial supporter of the Tea Party Express, saying that they typically give 10-15 percent of their sales to the organization.were selling”Straight Pride” tee’s Saturday at a Tea Party Express rally in Lansing, Michigan

Gay advocacy groups say the shirts are reminiscent of the ‘white pride’ slogan adopted by racist groups who oppose equality. ‘It’s like white supremacy,’ says Penny Gardner, president of the Lansing Association for Human Rights, a Lansing area lesbian, gay, bisexual and transgender rights group. ‘It’s as if they are saying the idea of supremacy is some how the American way. The American way is about equality, and equality is all we’re looking for.'”

Now I know that some of you UBER PC gays out tere are going to say things like “Hmmm, slippery slope. If we can say Gay Pride on a tee, why shouldn’t they be able to say Straight Pride”

Well think of it this way.  There would be no “straight pride” merchandise if not to specifically mock or counter gay pride. And this all goes back to the fact that it is still somewhat socially acceptable to bash gay people. The major news organizations basically treat it as a valid difference of opinion rather than the obvious ridiculous and dangerous bigotry it represents.

This is really disgusting. And with with the current surge in conservatism in the country by these Tea Party fucktards, hardly surprising. We need to get ready for much more of this fuckery. And be willing to fight back.