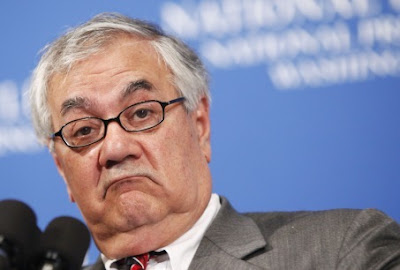 ”What a stupid thing to do.” Those were the first words an agitated Rep. Barney Frank (D-Mass.) spit out when commenting on the Get Equal protest that happened Wednesday morning, April 21, at a meeting of the House Education and Labor Committee. On Sunday, the openly gay Frank said the committee would be marking up and voting on the Employment Non-Discrimination Act (ENDA) ”this week or next.” The activists, led by Get Equal co-founder Robin McGehee, weren’t waiting. Signs and markers in hand, they walked right up the aisle of the hearing room on Wednesday to Chairman George Miller (D-Calif.), offering him a marker to mark up the bill right then. Frank called the action ”immature, tacky” behavior on Wednesday afternoon and said that ”George Miller and others are working hard” to see the bill passed in the House.

“Immature and tacky behavior” *chortle*  This coming from an openly gay politician who sits back and defends the Obama administrations after  it spits on us (Rick Warren at the inauguration), lies to us, (DADT will be repealed this year), and stabs us in the back, (The DOJ fighting against us, insulting us, and lying in DOMA cases.)  Perhaps Frank should get off his ample ass and make a stand and join us and finally be a Homo first and a Democrat second instead of the other way around,.